This semester, I used the new ModernDive textbook to teach introductory statistics for executive MPA students at BYU, and it’s been absolutely delightful. The book’s approach to teaching statistics follows a growing trend (led by Mine Çetinkaya-Rundel, Alison Hill, and others) of emphasizing data and simulations instead of classical probability theory and complex statistical tests.

Where this approach really shines is with hypothesis testing. This is the core of inferential statistics, but it’s really hard for students to wrap their head around how to reject null hypotheses and interpret p-values. Even seasoned scientists struggle with explaining what p-values mean. This stuff is hard.

ModernDive borrows from Allen Downey’s philosophy that there is only one statistical test and that at their core, all statistical tests (be they t-tests, chi-squared tests, signed Wilcoxon rank tests, etc.) follow the same universal pattern:

That’s all. Five steps. No need to follow complicated flowcharts to select the best and most appropriate statistical test. No need to run a bunch of tests to see if you need to pool variances or leave them separate. Calculate a number, simulate a null world, and decide if that number is significantly different from what is typically seen in the null world. Voila!

The infer package in R makes this process explicit, easy, and intuitive.

In December 2018 (just two days ago!), the World Bank announced a new Worldwide Bureaucracy Indicators Database, with dozens of measures of public sector effectiveness. The data includes variables that measure the proportion of women employed in both the private and the public sectors. Is there a difference between these two sectors? Do more women work in the public sector than the private sector? Instead of consulting a flow chart to find the right test that meets our assumptions and data limitations, we just simulate our way to a p-value and test to see if the difference in median proportions in each sector is significantly different from zero.

We first download a CSV of the WWBI data from the World Bank. In its raw form, it’s kind of a mess, with a row for each indicator in each country (so Afghanistan has a row for women private sector employment, one for women public sector employment, and so on), and columns for each year. This heavily commented code will load and clean and rearrange the WWBI data into something we can analyze and plot.

First, we’ll use a ridge plot (or overlapping density plots) to see if there’s a difference in the distribution of employment across these two sectors. We include quantile_lines = TRUE and quantiles = 2 to draw the median of each distribution.

Figure 1: Distribution of female employment in public and private sectors

We can use the infer package to determine the exact difference in the medians of these distributions. We use a formula in specify() to indicate which variables we want to be our response (or y) and which we want to be our explanatory (or x) variables, and then we calculate() the difference in median values. The order argument tells infer to subtract the public values from the private values.

The difference in the median proportions here is 15.2%. More women appear to be employed in the public sector. But because of sampling issues, is there a possibility that this 15% difference could potentially be zero? Could it be positive instead of negative?

To test this, we simulate a world where the actual difference in medians between these two sectors is zero. We then plot that null distribution, place the observed 15.2% difference in it, and see how well it fits. Here we follow the same specify() %>% calculate() pattern, but introduce two new steps. We first hypothesize() that the two sectors are independent of each other and that there’s no difference between the two. We then generate() a null distribution based on permutation (essentially shuffling the private/public labels within the existing data 5,000 times), and then calculate the difference in medians for the two groups. 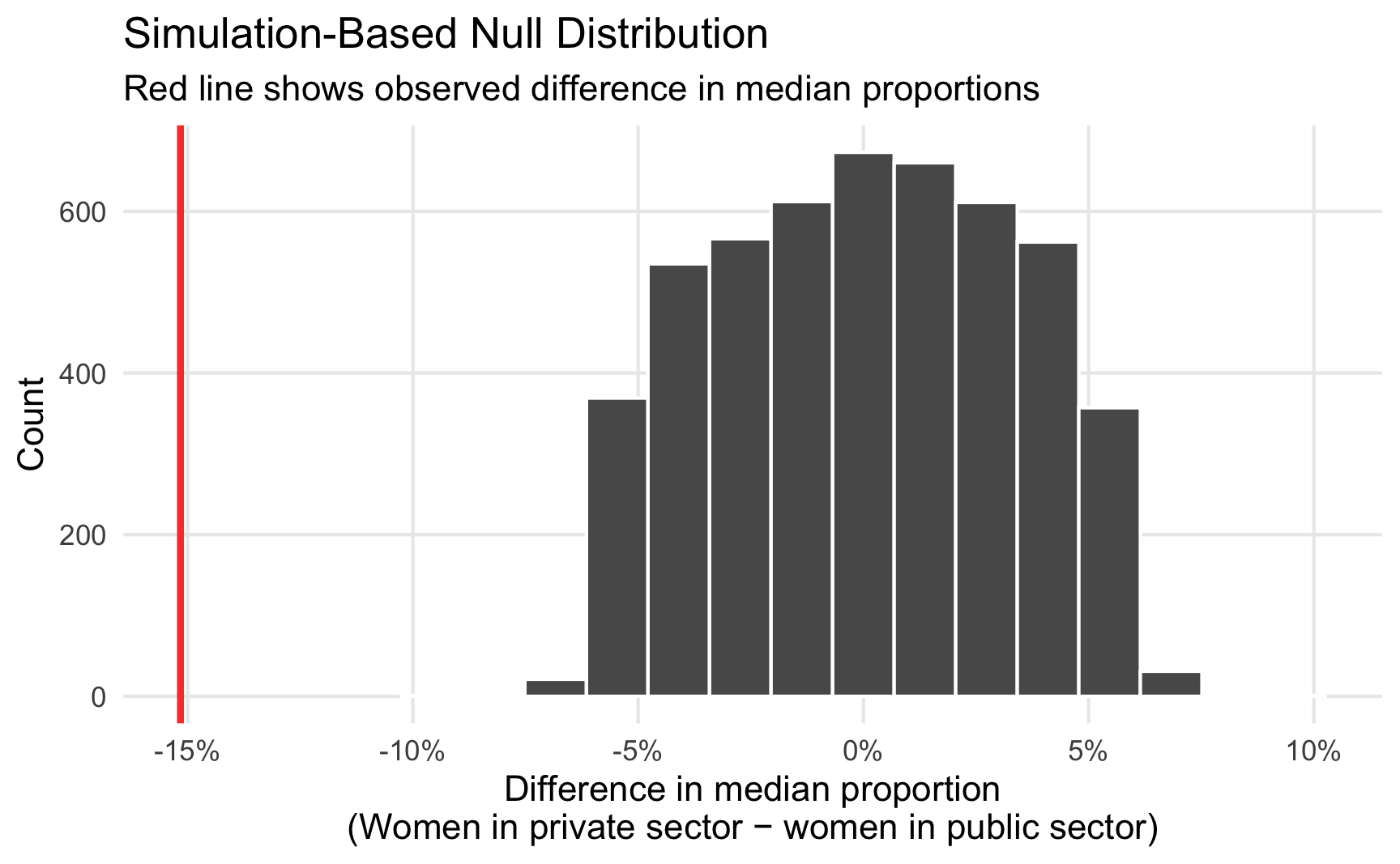 This red line is pretty far in the left tail of the distribution and seems atypical. We can calculate the probability of seeing a difference as big as 15.2% with the get_pvalue() function. Because we care about differences in means or medians (and because the difference could be positive if we flipped the order of subtracting the two groups—public−private instead of private−public), we specify direction = "both" to get a two-tailed p-value.

The p-value is basically 0 (it’s not actually 0—it’s something like 0.0000001—but because it is based on simulations, it’ll report 0 and R will show a warning), which means that there’s a 0% chance of seeing a difference at least as large as 15.2% in a world where there’s no difference. That’s pretty strong evidence, and I’d feel confident declaring that there’s a statistically significant difference between sectoral employment patterns for women, with more women working in public sector jobs than in the private sector.

And that’s it! No flow charts. No complex assumption checking. Using the infer package in R, we brute forced-ly simulated our way to a p-value that is actually interpretable, and now we know that women tend to work in the public sector more than in the private sector. Magic!